This is from Obama's team, through the NYT. It is the first time I've heard anyone express anything that would actually attack one of the root causes of our current crisis.

Basically, ratings agencies are paid to give advice on how to get a good rating. If their customers give them money, take their advice, and then do not get an increased rating, then those customers will stop giving the ratings agencies money. Perhaps unsurprisingly, the investment products of most of the clients of the ratings agencies got high ratings. That included a large number of very shaky investments (like the infamous bad loans).

Because these shaky financial instruments had high ratings, people poured their money into them. At some point, they realized the investments were, in fact, quite awful, and that the ratings agencies were not producing useful ratings. Now no one is willing to invest in anything, in large part because they don't trust the ratings agencies.

This is well-known, a major issue, and it is also the very first time I've heard any politician speak up on the matter. Restoring trust in the ratings agencies will be a huge first step to solving our problems. It is way better than shoveling money at banks in the hopes that they will start lending again. Congratulations to the Obama team.

Vanity Fair has an oral history of the Bush Presidency. Being presented with all the malfeasances and incompetences and infighting at once, in chronological order, from firsthand accounts, is absolutely fascinating. Missed chances to do everything from improving partisan relationships to getting Bin Laden before 9/11 to dealing with Katrina (Brownie has an eye-rolling quotation where he blames the failure of the Kartina response to intervention by Homeland Security) to keeping the recent bailout under control. A couple of choice quotes:

Lawrence Wilkerson, top aide and later chief of staff to Secretary of State Colin Powell: We had this confluence of characters—and I use that term very carefully—that included people like Powell, Dick Cheney, Condi Rice, and so forth, which allowed one perception to be “the dream team.” It allowed everybody to believe that this Sarah Palin–like president—because, let’s face it, that’s what he was—was going to be protected by this national-security elite, tested in the cauldrons of fire. What in effect happened was that a very astute, probably the most astute, bureaucratic entrepreneur I’ve ever run into in my life became the vice president of the United States.

David Kuo, deputy director of the White House Office of Faith-Based and Community Initiatives: I went to a communications meeting the day after [Senator Jim] Jeffords switched [parties]. I remember feeling like I was looking at people who had won a reality-game ticket to head up the White House. There was this remarkable combination of hubris, excitement, and staggering ignorance.

Jay Garner, retired army general and first overseer of the U.S. administration and reconstruction of Iraq: When Shinseki said, Hey, it’s going to take 300,000 or 400,000 soldiers, they crucified him. They called me up the day after that, Wolfowitz and Rumsfeld. They called me the next day and they said, Did you see what Shinseki said? And I said yes. And they said, Well, that can’t be possible. And I said, Well, let me give you the only piece of empirical data I have. In 1991, I owned 5 percent of the real estate in Iraq, and I had 22,000 trigger pullers. And on any day I never had enough. So you can take 5 percent—you can take 22,000 and multiply that by 20. Hey, here’s probably the ballpark, and I didn’t have Baghdad. And they said, Thank you very much. So I got up and left.

Lawrence Wilkerson, top aide and later chief of staff to Secretary of State Colin Powell: As my boss [Colin Powell] once said, Bush had a lot of .45-caliber instincts, cowboy instincts. Cheney knew exactly how to polish him and rub him. He knew exactly when to give him a memo or when to do this or when to do that and exactly the word choice to use to get him really excited.

There is a lot more more in the article. This has been a truly astounding chapter of American history.

They have video and everything. Check it out.

Possibly because I am in a generally pissy mood these days...

Politicians will break your heart, every single time. Anyone who becomes President has to be an egomaniac who appears humble, a megalomaniac who has to work in a system that is designed not to let anything happen, a manipulator who has to appear honest and straightforward, a pragmatist and cynic who has to appear to be an idealist, and a stark raving schizophrenic.

And their hubris overcomes them, each and every one.

Just remember the disappointments that Clinton and Carter were, unable to handle Congress (or, in Clinton's case, himself). Kennedy gave us the Bay of Pigs and started the real push into Vietnam. FDR sent Japanese Americans into internment camps. Reagan sold arms to Iranians in exchange for hostages, and used the money to fund the Contras.

I like Barack Obama. I gave him a lot of my time and money. He ran the first open source presidential campaign. He's not a magician. The problems that Obama faces are enormous. We haven't just voted away the last eight years, or the last 16 years of fractious partisanship.

On the plus side, he is a smart guy, understands the magnitude of the challenges, and is a change from the disaster of the last eight years. We'll see what happens.

Ever get that deja vu feeling?

The first pictures from the new movie, for those who care. The bridge looks like full-on Galaxy Quest territory, which could be very good, and could be very bad. I can't look at Quinto and not think "Sylar". This very Sylar-like picture is not helping matters.

Here is an interesting New York Times article about the etymology of the word "maverick".

Apparently, it is a family name. The family is a long line of civil libertarians who made that name by defending atheists, draft dodgers and the targets of red-baiting. As you can imagine, they are rather annoyed whenever they hear McCain and Palin describing themselves as such.

I've been telling my friends that although I disagree with her stands on the issues, I would make up my mind about Sarah Palin's basic competence and intelligence until I heard more from her.

That is truly amazing. It sprints past answer, sails past non-answer, transcends honesty and falsehood, makes a fool out of syntax and semantics, and makes me wonder if she is equipped to run the fryolator at McDonald's, much less the United States of America. It's like some bizarre drug trip.

One can only assume that — somehow — she wasn't prepared for a question on the most important issue facing the country today. However, it does cast some light on why McCain was suggesting that the presidential debate be rescheduled to when the vice-presidential debate is happening.

ETA: This is apparently called the Omnivore's Hundred, and is a list of foods Andrew Wheeler thinks everyone should try at least once in their lives. 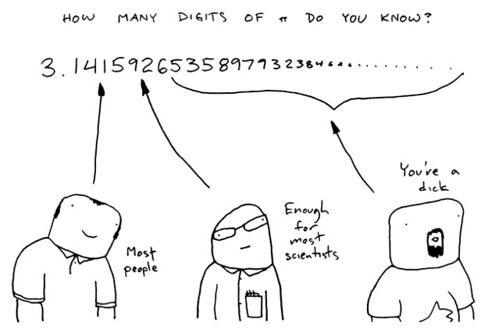 ETA: I know that this appeared yesterday, but I should really have set it for Pi Day!
Collapse